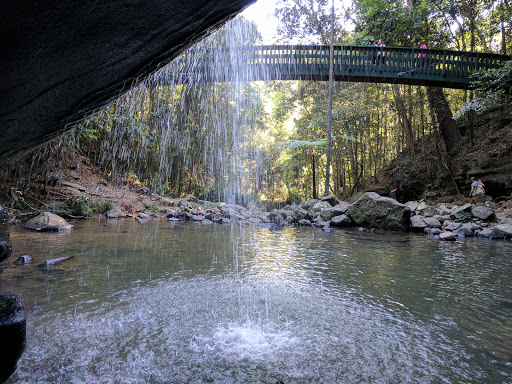 Spread across the top of the volcanic plateau and down the escarpment, the famous town on Buderim Mountain has recently celebrated 150 years of community spirit, since settlement in 1862. Buderim is in fact, the oldest established European settlement on Queensland’s Sunshine Coast.

Buderim Mountain from the early days. The Public School carries the full title in its name. Anyone who spends time here will see that Buderim is something special, from the busy CBD (known locally as

At one stage Buderim was in Queensland’s top four “sea-change” destinations, with urban developments latching onto the name in areas never traditionally considered. To add to the confusion, the local electoral boundaries were reconfigured and the area is also known under the same name, yet it covers an area from the Sunshine Motorway to Rosemount! (click to see an electorate map)

Not in an elitist way, but more in a caring way. This is demonstrated by the work of our unique Community Association (BWMCA), driven by volunteers . . . ., the remarkable commitment of the Buderim Lions Club, the heart-felt work of the Crosby family and Team Adem, the focussed enthusiasm of the Buderim Palmwoods Historic Tramway group and many more. One thing for sure, if you join the Buderim community, it will be great if you were involved in a community organisation, because